On June 17th and 18th, 2017 the 43rd Tag der Shanty-Chöre opened its gates again. With the Shantycrew Buitenboord, the Ol' Hands Shantymen, Easy & Free, The Forebitter Men and the Chanting Lads 5 choirs from The Netherlands participated this year and along with their combatants from all over Germany they made sure that Cuxhaven once again became the capital of shanties.

The smaller shanty groups already performed on Friday evening in the Shanty-Chor-Messe celebrating the event with a Shanty-Café dominated by the real work songs all performed a capella and unplugged. The overwhelming success in the last two years has firmly established the Shanty-Café.

Saturday traditionally finished with the Maritime Gala moderated by Wolfgang Zinow who competently and amusingly guided through the program with 3 choirs and 3 groups. At the Kommersabend following the Gala Easy & Free from The Netherlands put the audience into good humour in the beautifully decorated Foyer of the Kugelbake-Halle. 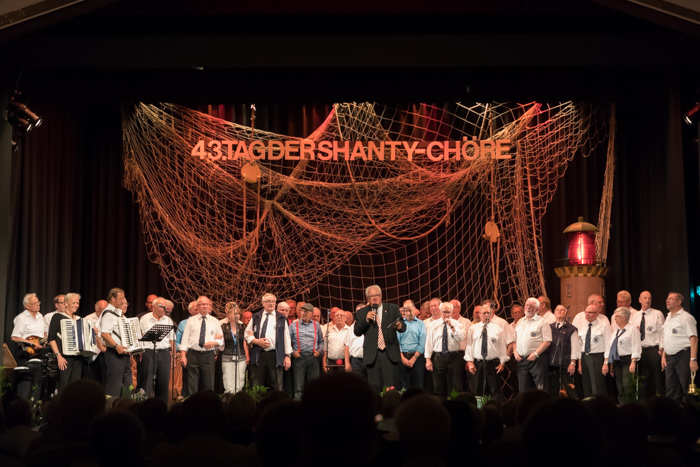 At about 18:00 o'clock all remaining choirs gathered on stage to sing "Rolling Home". An awesome finale of a once again felicitous event, that was excellently organised by Marina Albers and her colleagues of the Nordseeheilbad Cuxhaven GmbH.